‘Recent political attacks will not deter us from speaking out’, say Lewes Lib Dems 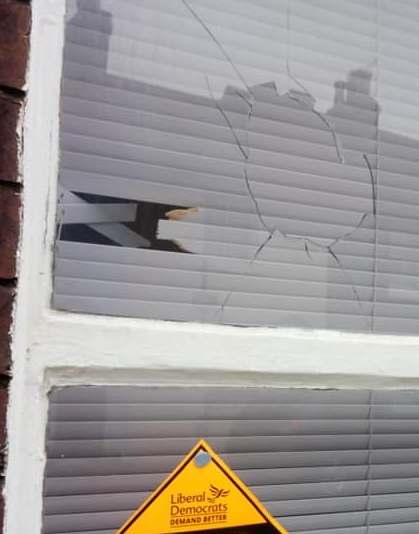 On the night of 29th May, political violence flared up again in Lewes, when 2 residences on Priory Street near the railway station displaying political posters with the message ‘Stop Brexit’ and a Lib Dem logo had their windows smashed with bricks.

Oli Henman, leader of the Lib Dem group on Lewes Town Council, stated: “We are appalled at the recent incident on Priory Street. This is yet another example of the damage that is being done to the fabric of our society by the Far-Right rhetoric of Nigel Farage and the aggression unleashed by Brexit. This follows earlier damage to several properties in two previous incidents around the time of the local and European elections in both the Priory Street and Wallands areas of Lewes.

“We are actively campaigning for a more tolerant vision for the future of our country, which is built on mutual respect and shared fundamental rights for people of all backgrounds and we will not be intimidated by this kind of politically motivated violence. We have written to Sussex Police and the Police & Crime Commissioner and expect them to take this matter very seriously.

“We were overwhelmed by the level of support shown in our recent local and EU election results, where we took control of various Town Councils and won 3 MEPs across the South East region, and it is clear from the doorstep that people in Lewes reject the politics of exclusion.”