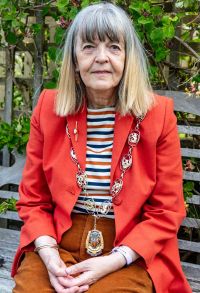 Her Chair’s theme for the year is about improving food security for all and she will be supporting all groups and charities who aim to do this and make our District a place where healthy food for all is more accessible.

Christine was born and brought up in East Sussex where her Brett family roots can be traced back to 1530 working in the farming community. She lived in many county wide police houses including 3 in Lewes in her formative years before college and embarking on a career in teaching.

A lifelong learner who worked in the private and public sector, she taught initially in Sociology then retrained to deliver Food Technology. In a career of over 30 years she taught in many challenging city schools, latterly leading a Design and Technology faculty .

She has long been involved in community activity and support having been a Samaritan, member of a collective which established an East London Women’s centre, a Dorset Rape Crisis support group and a Food bank volunteer.

Returning to East Sussex in 2013 she settled in Seaford and became involved in community politics, joining the Lib Dems in 2017 to support a friend she had made in a local election campaign. 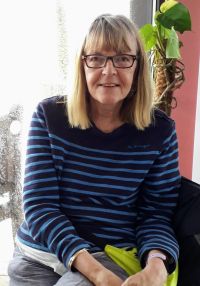 She cares deeply about the environment and set up the Refill Scheme for Seaford and Newhaven in 2018 to raise awareness about single use plastics. The highlight of this has been the establishment of 5 new public waterpoints in the town. She continues to engage with local environmentally based groups with a particular interest in avoiding food waste.

She relaxes by putting her nose in a book primarily historical fiction and has made many local links though her membership of The National Women’s Register where she developed a book worms group. Eating out, developing a salt wind resistant garden and fibre arts are also delights.

She has also researched her family history and spent long hours poring over Parish records at Pelham house in her youth. The development of the Ancestry website has advanced her knowledge and on getting her DNA tested she discovered she has over 30% East European Jewish genes. (presumably from her Lancastrian mother’ s side of the family). Lithuania is the source and one day she plans to visit the area.

Travel to the dark skies and wildlife of Southern Africa is another keen interest and at home she enjoys walking locally and the South Downs.