The Liberal Democrat group on the Lewes District Council were successful in getting a motion passed at the recent (Mon 9th Oct) full Council meeting which called for ‘new build’ planning applications to have electric car charging points included in the design. Despite Conservative councillors saying that ‘hydrogen cars might be the future rather than electric cars’ and ‘driverless cars might make electric cars obsolete within 10 years’ the Liberal Democrats were successful in getting their motion passed by a majority of one (17 voted for the motion, 16 voted against and there were 4 abstentions). The motion says:

“That from 1 January 2018 all new housing, new or replacement domestic garages and business/commercial planning applications to Lewes District Council include the provision of an 'electric vehicle charging scheme'; and that any such scheme would not become binding on the applicant unless included by the local planning authority as a condition of any planning permission granted”.

In his speech to members the Liberal Democrat District Council Transport & Environment spokesman Councillor Vic Ient said, “Michael Gove, the Conservative Secretary of State for Environment, Food and Rural Affairs, has announced a government plan to ban the sale of all petrol and diesel cars by 2040. What Michael Gove was doing was reacting to the research which has proven the high levels of air pollution caused by diesel and petrol vehicles. In the introduction to the government’s policy paper on air quality, issued in July 2017, it states:

‘We pledge to be the first generation to leave the environment in a better state than we inherited it. Clean air is one of the most basic requirements of a healthy environment for us all to live, work, and bring up families’ . I support this move by the government but without the provision for electric car charging points in the district the government will find it hard to force through the implementation of the ban on diesel and petrol cars”. 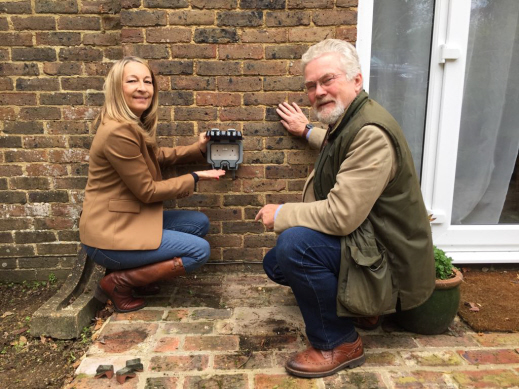 Cllr Sarah Osborne (pictured above with Cllr Vic Ient), the Lib Dem Group Leader said: “The provision of electric car charging points is a key measure in reducing emissions locally. Provision of infrastructure to facilitate and stimulate the uptake of electric cars is essential. The uptake of electric vehicles is growing significantly and therefore it's important that developers recognise and respond to this change and we, as the planning authority, have a duty to encourage that provision”.

She referred to initiatives taken by other councils to include charging points in new developments round the country including Lancaster City Council, Colchester Borough Council, Leeds, Bucks, Bradford, York and mid Devon. Concluding her speech Sarah Osborne said “So, it's not likely we will be leading the way on this but I don't want us to be left behind”.