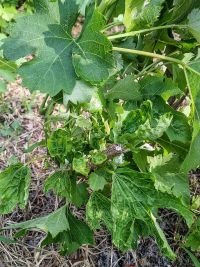 We have started a petition on East Sussex County Council's website calling on them to stop using glyphosate.

The text of the petition is below:

In 2015 the World Health Organisation declared that glyphosate, the world's most commonly used herbicide, was a probable carcinogenic in humans. There is little debate that it is a carcinogenic in animals.

A number of countries around the world have now banned the use of glyphosate and numerous councils throughout the UK have now banned it also, with Lewes DC slowly fading out its use. Bayer has now had to pay out £11 Billion in lawsuits due to the effects glyphosate has had on individuals' health.

Glyphosate is a strong weed killer. You only have to see where it's sprayed to see the effects it is having on our environment.  On 07/06/2021 ESCC were witnessed spraying near a wildlife pond. When challenged on social media, ESCC confirmed glyphosate was being used, which is frightening given the effects it has on animals’ health.

We know there are links to cancer from the use of glyphosate. This is disputed but as above it has so far cost Bayer £11Billion. The WHO has said there are probable links and we need to protect our children from its potential effects, so these products should not be used in parks and public spaces including our footpaths.

This petition does not focus yet on our farming industry; we appreciate that there is a lack of alternatives and the farming industry would be affected greatly if they were banned from using it. We would welcome local farmers moving away from glyphosate based weed killers to alternatives but we appreciate the farming industry is currently badly affected by Brexit and covid19. We do believe at some point that there will be a move away but that has to be when the time is right and allows protection for the industry.

We Call on ESCC

If not willing to do the above then we ask for the below.