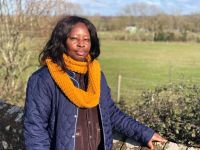 As a councillor and a previous Mayor of Lewes (the 9th female and the first BAME woman to hold that title), I know and love our area. That’s why I want to see the end to 19 years of Tory control at East Sussex County Council.

The Liberal Democrats are the second largest group on East Sussex County Council and the main challengers to the Conservatives in the elections this year across the county. I aim to successfully defend this seat to give us the best chance of taking control of the council away from the Conservatives.

I care deeply about our community, our environment, and our children, and, if elected, I will help challenge the injustices that have trapped many households in a vicious circle of disadvantage.

Standing up for our school children
Children only get one chance at their education. There is no greater investment than making sure every child gets the opportunity to fulfil their potential at school.

That means more money for education, especially in those vital early years, so that no child is left behind.

But the Conservatives are cutting school budgets in real terms despite promising more money during the General Election.

The Liberal Democrats are the party of education and opportunity. We will fight to make sure no school and no pupil misses out.

In Lewes, the Liberal Democrats are at the forefront of tackling climate change - taking real action, now. East Sussex County Council, under the Conservatives, is not doing nearly enough. Nationally, the Conservatives are loosening the planning system that protects our wonderful landscape. Locally, they are doing far too little to protect our environment.

Janet Baah says “If we control the county council we could and we would take positive action on the climate crisis.”

Fixing our roads and pavements

East Sussex’s residents have been badly let down by the Conservative-run county council, Janet says.

“After 20 years of Conservatives in charge of our roads and pavements they are potholed and in a state of disrepair. These potholes damage our cars, represent an accident risk for our cyclists and are a trip hazard for people using the pavements, especially our more elderly residents.

“Lib Dems would ring-fence the money from parking charges to repair and maintain our pavements and roads, making them safer for car drivers, cyclists and walkers.

As well as that, I am strongly supporting the campaign to secure

20 mph limits in our villages and residential areas.