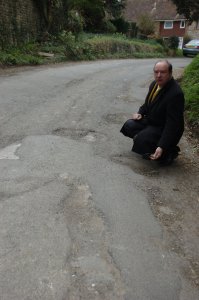 Norman Baker MP is demanding a review of the operational practices ESCC is following to repair potholes across the county.

The Lib Dem MP says East Sussex County Council are “wasting money” having received complaints from constituents across the area about the council’s poor performance over pothole repairs, and is writing to Transport Director Rupert Clubb to ask for a root and branch review of operational practices.

Complaints received by the MP have included:

Norman said: “To repeatedly go out to a site and do nothing, like in Bishopstone, or a jobs worth attitude to repair one pot hole but not one next to it is just a waste of time and money.

“Road users and residents want repairs done in a timely, effective and efficient manner, but what I am hearing is that this is not happening. It is high time they were.”