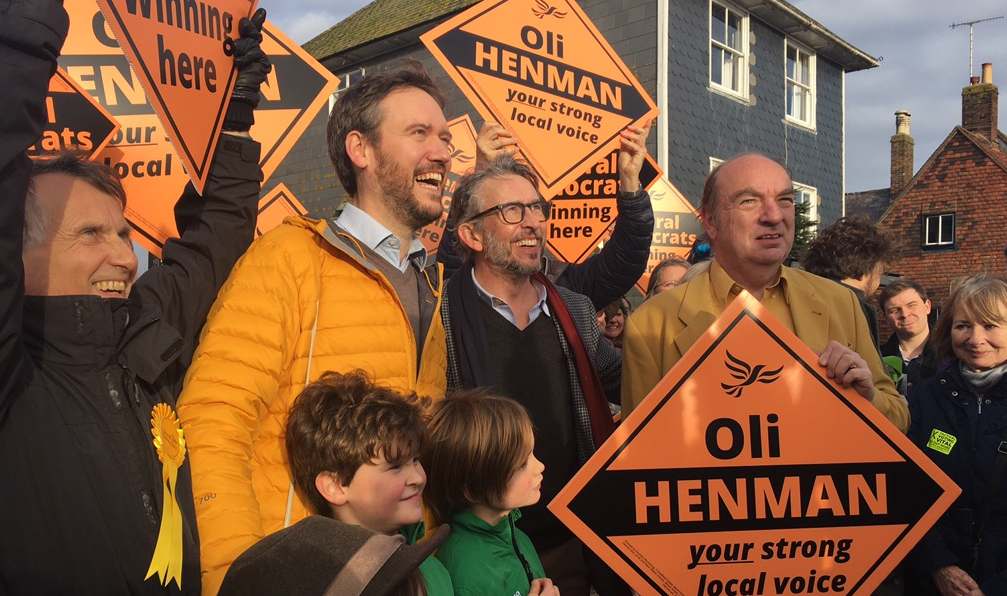 The general election battle in the Lewes constituency is now one of the closest races in the country, with the numbers showing this is neck and neck and Lewes is one of the seats on which the outcome of the General Election will be decided. Comedy star and Labour supporter, Steve Coogan, visited Lewes on Sunday to show his tactical support for the Liberal Democrats in Lewes and urge voters across Lewes constituency to back the Liberal Democrats in the General Election on 12 December.

A large crowd of well over 100 residents and supporters were on Cliffe Bridge to hear Steve Coogan put the case for tactical voting and defeating the Tories across the country. Former Liberal Democrat MPs, Norman Baker and Evan Harris were also in the crowd.

“I’m here today as a traditional Labour supporter. In this constituency where I live and across the country, we need to defeat the Tories by any means necessary. I’ll be voting for Oli on Thursday because that’s the smartest thing to do.

“People who have spent all their lives with one party are looking at their constituency and thinking what’s the best tactical choice and I urge everyone here to vote Liberal.”

“We are fighting a very close battle to take this seat from the Tories. We are fighting for a fairer, more democratic, more sustainable future. I have been incredibly humbled and grateful, that so many of you have been out with me over the last few weeks.

“This election here could go down to the wire. So, I’m incredibly grateful that we have Steve Coogan here with us. People in our constituency who are thinking of voting Labour or voting for the Greens, can now see by voting Liberal Democrat, we have a real chance to get Boris Johnson’s Conservatives out on 12 December.”